This section was actually written AFTER the following.   What started out to be a brief dip into powder coating, turned out to be an epic journey.   As it developed, this is NOT a result, but a description of a process.    No representation is made that any of this is the best way, only one (or a number of) way(s).  The idea here is to describe the journey, including all the missteps and blind alleys, with the hope that, if someone else wants to try this, they can avoid those, or, at least, realize that they might not be the most productive way to travel.

Powder coating?  Well, I tried it.   Why?  As George Mallory so aptly put it, “Because it’s there.”  My interest was initially piqued by the then-limited information on the Cast Bullet Association (CBA) Forum, in the Coatings section, and by an article in The Fouling Shot, by CBA president John Alexander.  In addition, I perused the “other” forum and found much more information.  Truth be told, maybe too much more.  It was more than a little overwhelming.   And, much of it did not reflect my experience, once into the process.

Other than pure curiosity, two rifles in my collection refused to shoot traditional cast bullets at over 2200-2300 fps without significant to severe leading and/or with reasonable accuracy.  All the usual fixes were tried, including custom moulds made by highly skilled makers from chamber casts, paper patching—well, you know the drill.   The bores did not LOOK rough, but who knows.  Maybe powder coating would be the answer.   Curiosity also had a lot to do with it.   And winter boredom.

Some goals were set prior to initiating this journey.  They were:

Initial experiments were with the “shake and bake” method.  The primary motivation was provided by an internet presence who discouraged another from using this method, characterizing it as “the hillbilly method”.  Well, coming from a long line of hillbillies, obviously it had to be tried.

This method consists of initially coating bullets by shaking with the powder paint.  YouTube has a wonderful video detailing what seems to be the most common version of method.   In this, the gentleman put the bullets to be coated in the appropriate container (plastic, recycling code “5”, in the small triangle on the bottom of all recent plastic containers–this type of plastic is purported to promote the static charge necessary to coat) along with ½ cup powder paint, and some air-soft ammo as a buffer.   The container is then shaken (not stirred) for a few seconds and the bullets emerge perfectly coated.   Well, no, they don’t.  At least not for me.

As demonstrated, the bullets do need to be de-greased thoroughly prior to coating.  The powder will not stick otherwise.  As well as being logical, experimentation revealed this to be true.  Mineral spirits, acetone, lacquer thinner—whatever is handy–will work.   In the video, a towel was soaked, and the bullets rolled in the towel.  It worked, but I’m cheap.   Dropping them in a plastic bottle with mineral spirits and swishing worked just as well (maybe better) and required less solvent, which can then be reused multiple times—no clear limit on this reuse has as yet been established.  No human contact after that.   Tweezers, forceps or clean vinyl gloves only until coated and baked.

The shaking by hand didn’t work, so what now?   Somehow, the idea of using a vibratory tumbler entered my fevered brain.   This might have been somewhere in the material read, or one of those 3 AM ideas.   I suspect the former, as later information revealed that others are using tumblers as well.   The bullets were placed in the above appropriate container (many OTC and Rx medicine bottles have this code) along with the air soft pellets (to avoid bullet “dinging”) and, about ½ -3/4 TEASPOON paint, assuming 20 to 50 (ish) bullets to be coated.  The container was sealed (the lid was duck taped down tight), placed in an empty vibratory case cleaner, and checked every half hour for progress.    It seemed that about 3 hours was required to evenly coat all bullets.  That number has held up, plus or minus 30 minutes (mostly minus) ever since.

Now they need to be baked.  Not knowing what to expect in terms of fumes or stench, a toaster oven was purchased ($9.95 at a local thrift store, courtesy of my wife, the Thrift Store Queen of North Idaho).   Good call, by the way.  DO NOT use the oven in your kitchen for this.  IT STINKS!  Open the garage door.   Use a fan.  Stay out while they’re baking (make sure your wife does not drive the car into the garage mid-process).   The oven’s temperature settings were tested with a known accurate thermometer and were found to be right on the money.   So, 400 degrees for 20 minutes.  But how?

The problem is that, in powder coating parts, they are suspended from a wire while being baked.  Not real feasible with bullets.   If they are set on the base on the oven tray, they WILL stick.  Tight.   Tight enough to remove the gas check when they’re pried off.  The gas checks have to be removed from the oven tray with a hammer and chisel.  Some of them wouldn’t come off.  That’s tight.  One person suggested ¼ inch hardware cloth folded (see picture).  The bullets were placed in the openings, nose down.  It works, but not well.  My bullets were very unstable when so held, as very little of them were actually in the mesh.  One tires of picking them up, de-greasing again, re-coating and replacing them.  And tires QUICKLY.  I “improved” the device by pushing a nail punch of appropriate diameter into every third hole, thereby enlarging them.  Now it worked, except, well, same as above.  The bullets stuck to the wire, leaving a rough ring around the bullet at whatever level they intersected the mesh.  Does that matter?   I don’t know, but it bothered me.   That led to spraying, which will be covered in part two.

Once baked on, this stuff is TOUGH.  As a preliminary test, a coated and baked bullet was placed on an anvil.  It was then beaten severely with a machinist’s hammer.  The resulting quarter sized disc was still powder coated.  There was NO flaking. 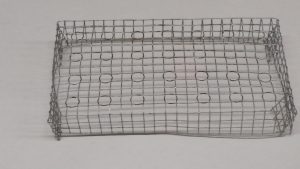 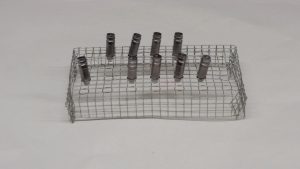 Modified rack with bullets–they still lean, so care is required when moving.

Just a few words about paint.  Don’t save money here.  I did, and now have three pounds of useless paint to dispose of.   (Wait, maybe I didn’t save any money…..)  The first paint was purchased from the local outlet of a national discount tool company.   It didn’t work well.  The paint refused to cling, clumped up and generally misbehaved.   Paint from one of the big high-quality folks, like Eastwood or Columbia Coatings, may cost a bit more initially, but will be less expensive in the long (or even short) run.   Clear paint isn’t as pretty, but it works great. It’s very light, and seems to adhere evenly and well.

The issue of alloy hardness may enter in here as well.   This has not as yet been examined.   It may occur to you that it might be possible to kill two birds with one stone by baking the bullets for a longer time, and then submerging, obtaining both powder coated and hardened bullets simultaneously.  Well, it occurred to me as well.  Forget it.   Dropping hot powder coated bullets into cold water is the only way so far identified to remove the powder coat, other than re-melting.  Weird things happen.  A couple of bullets actually exploded.  Well, OK, broke in half with a loud and (when one’s face is inches above the bucket) rather disturbing “crack”.   The coating came off about 90% of the bullets in splotches.

And speaking of re-melting, it’s probably not a grand idea, at least indoors.   The odor is intense and unpleasant.  Is it harmful?   Well, who knows?   It’s probably not worth finding out.  After one experience, I now toss them in a bucket and will melt them outside when the plumber’s furnace is fired up.

Before discussing the goals above, first, let me state that neither I nor the Spokane Rifle Club support, encourage, suggest or recommend that ANYONE try this, and none of us will be responsible for anything bad happening if you do.   If one decides to use jacketed bullet reloading data with cast bullets, no matter HOW those bullets are prepared, that person is strictly on his/her own.   Some rules may apply, some not.  Problem is, one doesn’t really know which are which until it’s way too late.   So,  when I went where few have gone before, I did NOT go boldly, but very, very cautiously. Mostly.  Even then there were a few anatomically puckering moments.   Should someone, strictly on their own hook, decide to try this, discretion is good.  Enthusiasm is NOT good.  And, THE RESPONSIBILITY IS YOURS.

So, what about the goals?   First, can cast bullets be shot at jacketed velocities with powder coating? Yes, they can.   Velocities of 2500 to 2700 feet per second with 165-185 grain bullets in the .308 Winchester are easily achievable with reasonable accuracy and NO leading.  At all.  Not even a sparkly bit.  Two-patch clean up.  The barrel in question now has 1000+ powder coated rounds through it, and, upon insertion of the bore scope, betrays no unusual issues.  It looks perfectly normal.

What are the upper limits? No idea, and using the .308 or .30-06, I’m not gonna find out.   In one of those above-mentioned pucker moments,  using a .30-06, a 185 grain PC (powder coated) bullet went over the Oehler 35P sky screens at slightly over 2950 fps.  Yipe!  I won’t even mention the load.  Suffice it to say, that it was a very well known upper middle-of-the-road load right out of the Speer manual.   See what I mean about being on your own here?   Thinking this had to be a fluke,  the trigger was pulled once more (OK, so this time enthusiasm won out over discretion).   Nope.  Not a fluke.   Both hit the paper at 100 yards.   Discretion kicked back in,  and it was opted not to go for the ten shot group.   The remaining loads were pulled, and both powder and bullets were correct.

No leading.   Not a trace.  Just a sore shoulder from trying a stupid shooter trick with a Weatherby Ultra-light weighing 6 pounds all up off the bench.

As to the remaining goals, the jury is still out.   Currently, the spray (non-hillbilly) method is being tried.   It’s early days as yet.   Part two will describe my efforts  there, and, hopefully, a third installment will comment upon both methods with some feed back on strengths vs weaknesses of each.   Comments or questions are encouraged.  If you’ve done this before, I could use some help (see e-mail address at top of page). 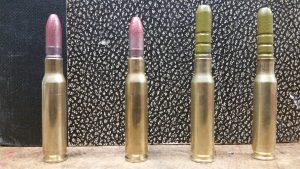 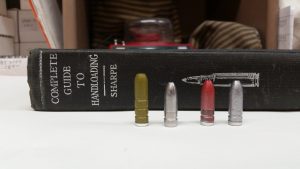 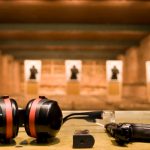 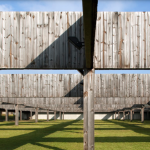