First, my apologies for the delay in positing this.  We were traveling, and, for some reason, I was unable to access the SRC web site via my traveling computer.  The opening match of the season took place on 6 April 2019.  Unlike last year, the weather was not a major factor in the match.  Temperatures were seasonal, in the upper 40’s with occasional light rain.  Wind was not a problem until the last two targets.  Those shooting military rifles missed that challenge.

The match was well attended, with only one empty bench.   Five competed in Hunter class and there was one entry in Plain Based Bullet class.   Four were entered in military rifle classes, two with iron sights and two using scopes.  Unfortunately, Bev Pinney was forced to retire early due to equipment problems.

One competitor, a newcomer to SRC cast bullet matches, shot unclassified.   Dave Grout shot his iron sighted Browning 1886 on a military target, as the CBA bench rest targets are not real visible without a scope.   He did VERY well.   Hopefully, he’ll return.

An abbreviated equipment list is below with participant’s scores.   Our next match is 4 May.   As usual, shooting starts promptly at 9:00.  Anyone interested in competing is encouraged to contact the cast bullet chairman.  Information is above. 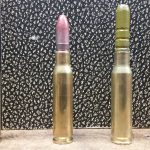